From the windiest place in the UK to the Lewis Chessmen

The Butt of Lewis, Port of Ness, Stornoway and Eilean Fraoich Campsite

As the campsite owner had warned us, it was an extremely windy night, but we managed to sleep OK and nothing got damaged.

We clearly hadn't had enough of the wind yet, because our first destination of the day was the windiest place in the UK - the amusingly-named Butt of Lewis. This headland is the furthest north you can get in the Isle of Lewis and the entire Outer Hebrides. The red brick, unpainted lighthouse there was built by David Stevenson, a member of the famous lighthouse engineering Stevenson dynasty, in 1862. It's a working lighthouse, only automated in 1998 (one of the last in the UK to do so), but visitors can't go inside.

We admired some cormorants (or shags) on one of the many rock stacks and successfully avoided being blown into the sea when we got close to the edge. The place was beautiful but we could see how bleak it would be in a howling gale, with powerful waves battering the rocks.

From there we drove to a nearby village called Port of Ness, where we admired the view and watched lots of gannets dive for fish in the harbour. The wind was still so strong that when I tried walking along the breakwater I had to retreat after only a few steps.

Stornoway, the largest of very few towns in the Outer Hebrides, was our final stop. To get there we drove across the island, past miles on end of peat bog in every direction. 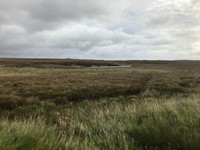 We parked by the harbour and had a quick look there before making our way down and across the river to the Victorian Lews Castle, which contains Museum nan Eilean, the Museum of the Islands.

We walked through some lovely woodland within the castle grounds.

Museum nan Eilean was small, free and packed with incredibly interesting artifacts and information related to Outer Hebridean ways of life over the centuries up until the present day. I really liked the videos - in Gaelic with English subtitles - of interviews with various inhabitants at work and talking about their connection to where they live and their memories of the islands. 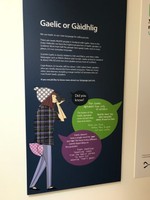 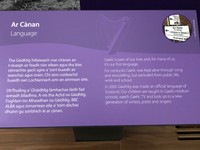 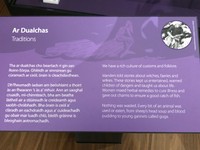 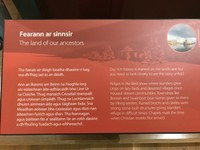 Of the artifacts, pride of place were six of the famous Lewis Chessmen. Discovered on Lewis in 1831, they are made of walrus ivory and teeth and date from the 12th century. Stunning craftsmanship - my photos don't do them justice. 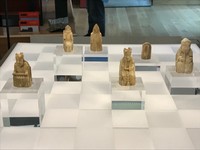 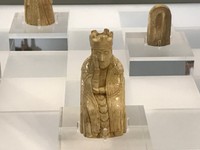 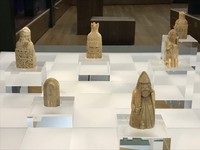 A selection of my other favourite exhibits include:

Finds from Viking and Bronze Ages hoards, including silver arm and finger rings, brooches, a shale bracelet and a macehead. 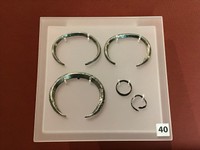 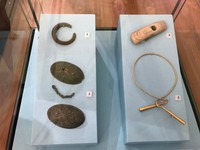 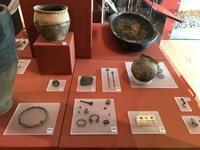 A twenty shilling Stornoway bank note - I forgot to note the year but it looks like it dates from the 18th or first half of the 19th century. 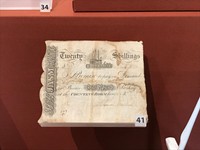 A Gaelic Bible, a whisky bottle with horn nip glasses, a dirk (dagger) associated with a notorious local outlaw in the 18th century, a book called 'Prophecies of the Brahan Seer' (a local from Uig who many believed could tell the future) and some seabeans. Seabeans, also known on the islands as Mary's bean, nut or kidney (after the Virgin Mary), are originally from Africa and Latin America but washed up on the islands and were used as a charm by women during childbirth. 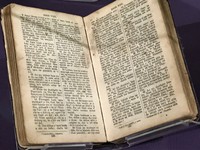 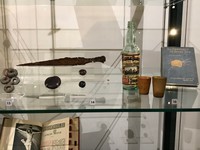 And last but not least, the first computer on the Isle of Lewis. It had 1MB of capacity and was used to print wage slips by the Health Board. 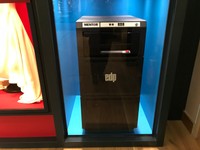 On our return to the town centre we bought fridge magnets and a couple of gifts from a great tourist information centre and browsed at the Baltic Bookshop before having a late lunch at a fish & chip shop. I had homemade fishcakes and chips, Dave had black pudding and chips and we shared a can of Irn Bru. Our portions were so enormous we saved half for dinner! Delicious though.

Our last three stops before leaving Stornoway were to a post office for stamps, a butcher's for kangaroo steaks (having spotted an exotic meats poster in the window), and the only Tesco in the Outer Hebrides to get drinks, bread, mushrooms to go with the steaks and oil to cook them in.

We were so full from lunch that we didn't end up having dinner at all. We arrived back mid-afternoon. Dave fell asleep almost straight away and didn't wake up for any length of time until the next morning! The rain, which had been around since Port of Ness, continued all evening and into the night. I read for quite a while and browsed the internet before getting an early night myself.